John here! We'd like to give you all a little progress report of our development.


It's difficult to pinpoint on how complete the level design of XING is as it is constantly evolving with each iteration of our build. I can say that we have finalized the general layout of all of our levels and have hit "picture lock" on the scope of the game, meaning we have all of the levels of our game placed in editor, and while puzzle and environment details may be changed, the scope of the levels is set. Koriel in particular has been spending a lot of time in the map editor crafting and refining these worlds in order to maximize their storytelling and entertainment.


We've spent a tremendous amount of time since our last public showing developing new and improving existing mechanics. Understandably, how players interact with the game is very important to the experience we are looking to create, so mechanics have been a priority. In addition to the core weather powers players will encounter on their journey, players will push objects, click on buttons, light fires, raise huge stone statues, throw things, and more as they solve increasingly complex puzzles in exotic locations. Making all these systems coexist in a cohesive manner is no small task; fortunately we made this a priority early and we have been able to design puzzles and levels with these interactions in mind.

Hover Over this image to change it to sunset:


Being a puzzle game, we are trying our best to keep you guys up to date with our development without revealing any of our numerous puzzles offered in XING. I can say that we’ve really spent some time exploring our mechanics to make some killer puzzles. We’ve been working on an additional system for optional puzzles - not unlike the “star” system in Talos Principle. Stylistically our puzzles play far more organically than Talos as they complement the adventure aspect of the levels. Ultimately you are playing these levels with an end goal in mind, but optional obstacles present a fun opportunity for those who like the challenge.


Since our last public demo we have made huge strides towards the goal of getting XING to run on as many systems as possible. While we develop using GTX 980's graciously donated to us by NVIDIA, I use my Gigabyte Brix Pro as the target low end system. It's still a bit early to make any official system requirements for our game, but I have been able to run a few of our levels on low settings at 720p at around 40 - 45 fps on the Brix - very playable if not quite as pretty.

There are always new advanced rendering features being announced by Epic, and while it's fun to experiment with new tech, it's imperative we evaluate new tech on a case by case basis. Being in charge of engineering I've had to make a few tough calls and compromises in order to make sure the game strikes a balance between beauty and playability. XING is fully dynamically lit and has a plethora of persistent shader effects on nearly every object, so we chose to go with a simpler image based lighting solution rather than pursue an expensive global illumination solution. We avoid costly shader techniques such as parallax occlusion mapping and tessellation by making sure our geometry has plenty of detail in the mesh to begin with and build levels of detail from there. This extra attention to detail means even the simplest rocks have three to five man-hours of work put in to them, not counting the time it takes to develop the art style and shaders to begin with.

Speaking of low settings, we've also spent some time developing a comprehensive system settings menu. Being a longtime PC gaming aficionado, it's personally very important to me to provide the maximum flexibility of rendering features to our players.

Hover Over this image to see the quality difference:


A personal focus of mine these last few months has been making sure the game uses the graphical prowess of Unreal Engine 4 to the fullest extent. Our game features a plethora of graphical goodies, all carefully optimized to scale well with all sorts of hardware.

Screen Space Reflections, while reasonably costly to render, add a great visual flare and are easily scaled by our system settings menu. We opt out of using Unreal’s standard static reflection environment due to the dynamic nature of our title.

Though it may be less apparent at first glance, XING has undergone many art style changes. From shadow rendering to color choices to the way we make our models.

The image below is a great example of an area which we have kept looking relatively the same throughout its initial development - yet there have been loads of changes you can spot. Here are some changes you might notice: 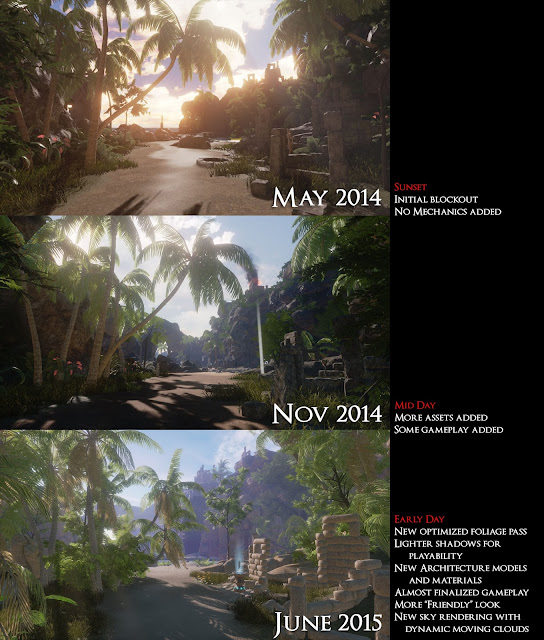 By this final image we are happy with the rendering and overall feeling of this particular area.

Using a combination of shader tricks and meshes, snow procedurally falls and collects on the entire environment. This snowfall, while beautiful, presents new challenges and obstacles to the player.

Dynamic lighting means every single area in our game needs to look great in a variety of lighting setups. Great care has been taken with maintaining a balance between realism and stylization.

We’ve carefully optimized dynamic lighting to help display gameplay information. These orbs (below) change color as you discover more secrets in the levels, and their light dynamically casts onto nearby objects.

Foliage rendering has always been a major focus of mine. Koriel put together this meadow scene in our forest level which I think showcases some of the work I’ve done on the assets and rendering. For the grass, I was shooting for somewhere between the flat shading style of the upcoming game “The Witness” and a more realistic approach.

I've overhauled our landscape system with a variety of complex shader masks and effects. Rain pools in sections of the landscape as rain creates ripples.


VR has had some pretty crazy new developments since last fall. We’ve been putting in countless hours making sure we are on target to fully support VR on the latest hardware at launch. On the design side, we’ve made some improvements to the way you move in VR, as well as the way you manipulate objects. We’ve embraced the idea of text existing as a physical object in the world, so any time the player needs to read something it is presented in 3D space. We can’t wait to get our hands on the next generation of VR devices!

That's all for now!
Cheers!

This year E3 was about preparing for the future of XING, and taking some time off from development to have a bit of fun! Since James and I both live in California, we decided to go to meet with contacts, make new friends and try out the latest games! We put the latest alpha build on some flash drives for some of the contacts we would be meeting with....and I added XING stickers to make them look nicer :) 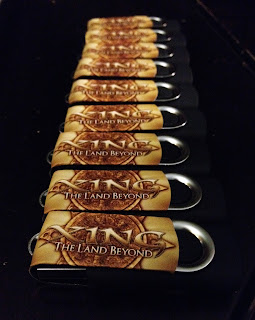 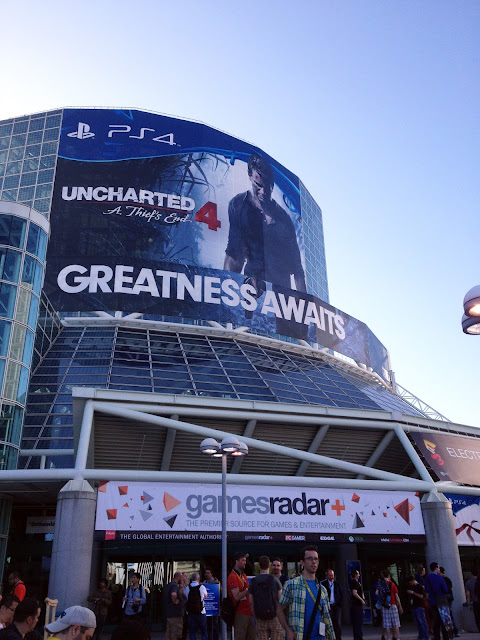 Since we didn't have any meetings in the morning, the first thing we decided to do was explore. This resulted in some Star Wars photos! 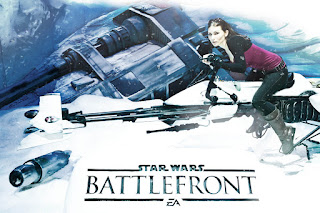 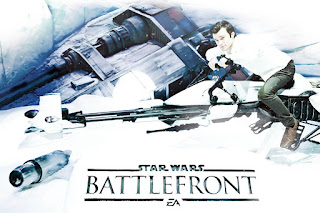 Trying out the Omni: 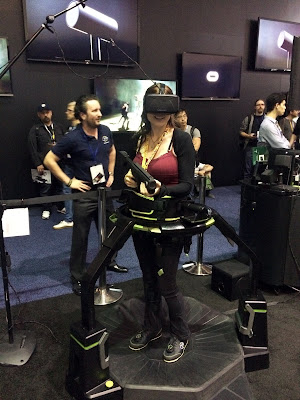 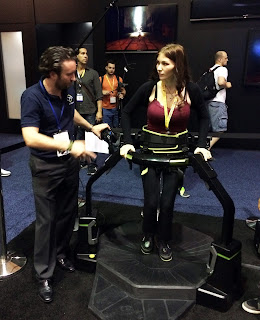 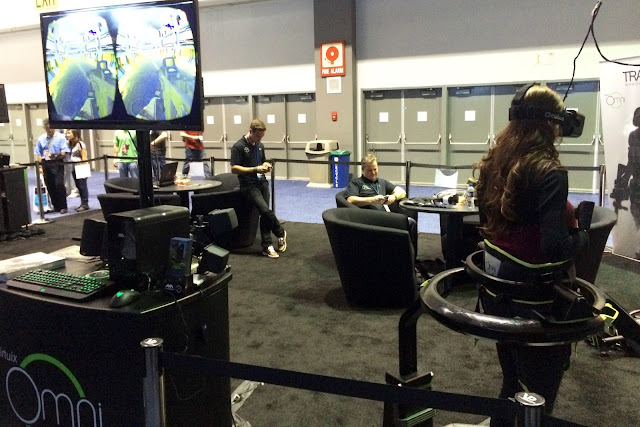 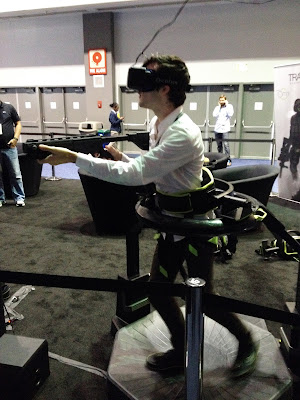 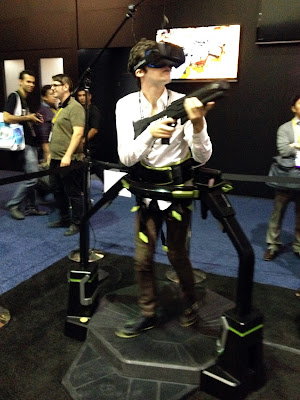 James and I both got to try the Virtuix Omni. I went into it with an open mind, try to think of how this could be applied to XING (naturally), and I actually came away impressed. At first it felt clunky, having to waer the belt and feeling the plastic bowl under the special shoes - but once I got into the game I didn't focus too much on where I physically was in real life - but rather I focused on where I was in the demo. Though it's definitely not for everyone, I think this could be a fun addition to any VR experience that required locomotion - plus, it might help keep you in shape! ;)

Although I feel that this technology isn't ready for the public market quite yet - since I get Sim Sickness in VR games, I can see something like this helping people like from from feeling any sort of SIM-related nausea.

Of course, we hope to eliminate that as much as we possibly can for everyone in XING - without anyone having to buy a crazy omni-treadmill unless they truly want to!

Stopping by the Nintendo Booth: 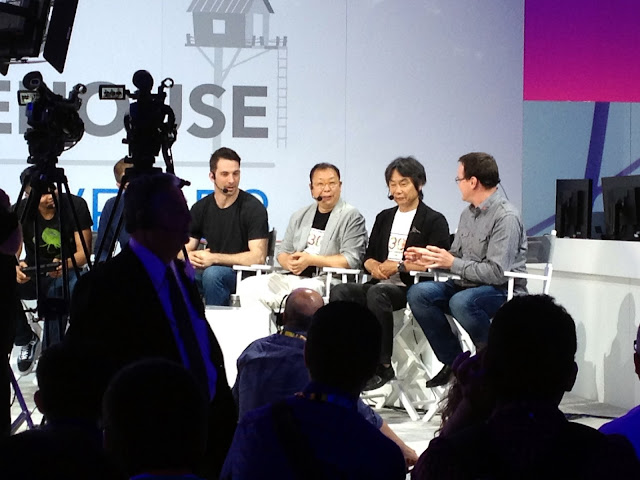 During our free time, we tried to play as many games as we could.

We tried out the Virtulaizer after trying out the Omni the day before. 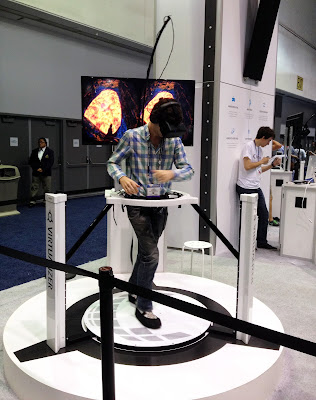 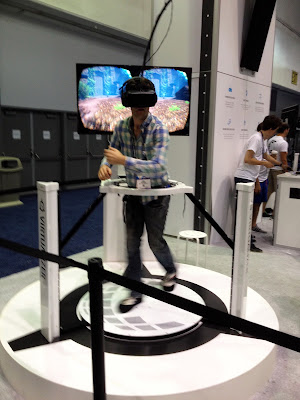 This didn't require special shoes. Instead they put nylon booties over our normal shoes so that we would "slip" around the slick, flat surface. Unfortunately, this did not feel as good as the Omni, as far as an omni-directional treadmill for VR goes. It was far too slippery to feel like actual walking, and the tracking for the demo was not perfect. Overall, it was fun to try out a different technology, but I would personally choose an Omni over the Virtualizer. 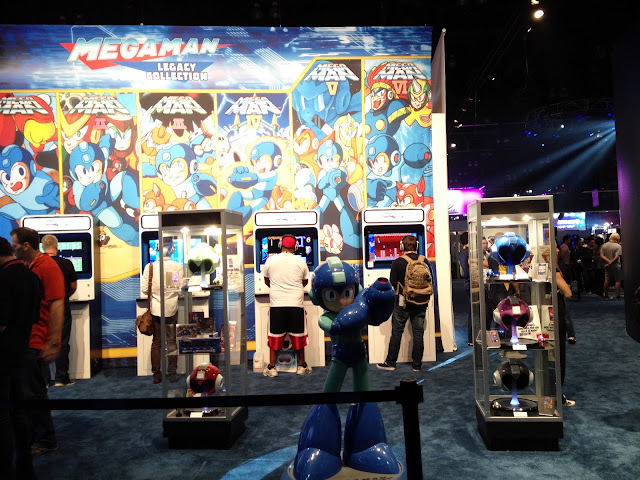 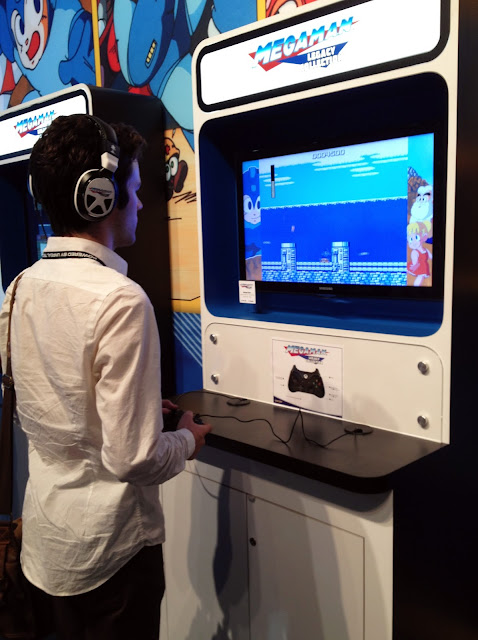 
A video of James Piloting the X-Wing! 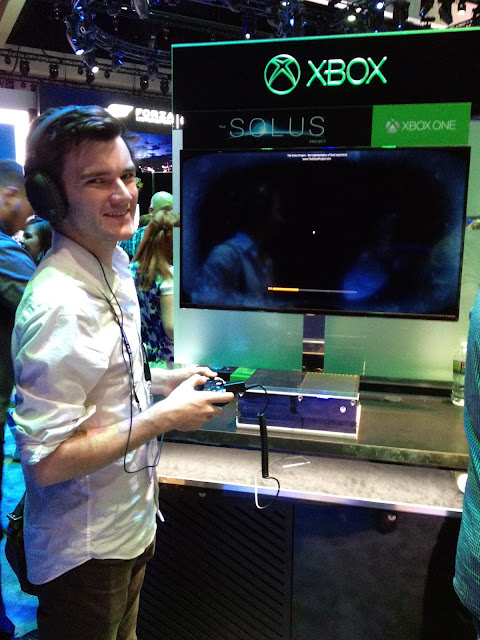 We had a great time making contacts and playing games at E3 this year. Afterwards it was back to developing, as usual :)